Gays were married on the Grammies last night. Fox News’ Todd Starns was quite hurt, calling it a “hate-filled, bigoted, intolerant diatribe against Christians.” 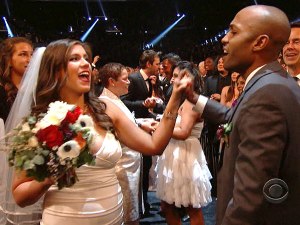 In a related story, David Duke, a prominent member of the KKK, complained about seeing an interracial couple during the show. “It hurts, you know?” he said. “These people have no concern for my feelings. It’s so hateful the way they treat my views.”

Yes, all over the United States, bigots are finding themselves the subject of intolerance, and being completely unaware of the concept of irony, have declared that anyone who fights against their bigotry is the real problem.

An attack on their view is an attack on every single foundation of their religion — and, by God, that is just intolerant. Just look at them! What could be more hateful and mean than expressing your love for someone by marrying them?

“We should never ever disagree with someone else’s views if they are based in religion,” Starns claims, “because otherwise, you are just a hateful, mean person. Oh, except for Muslims. Screw them and everything they stand for.”

One thought on “Nation’s bigots subject of hate-filled intolerance”