Michelle Bachmann said Americans voted for Obama because he was black and they felt guilty. Yep! That’s why I supported Jesse Jackson, Al Sharpton, Carol Mosley-Braun and Herman Cain. 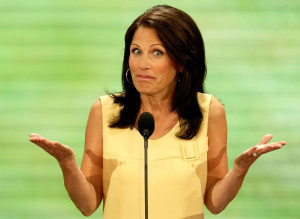 No. Wait. I remember now. I didn’t support any of those people.

Dammit! Why can’t the world be as simple as Michelle Bachmann, where there is black and white and nothing inbetween — where the color of someone’s skin is the determining factor instead of complicated things like their experience, stand on the issues, and education?

But no, that’s just too subtle for her. The fact that the majority of Americans supported a Senator who graduated at the top of his class from both Columbia and Harvard Law, whose positions on the issues most matched theirs, and who belonged to the party that had won more votes in three of the last four Presidential races is completely meaningless to her, because the only thing she sees is the color of Obama’s skin.

Let’s see … there is a word for someone like that, isn’t there?

3 thoughts on ““He only won because he’s black””