10. Sanders, confident of victory or wishing to appeal to the youth vote, lights up a blunt while Hillary is talking 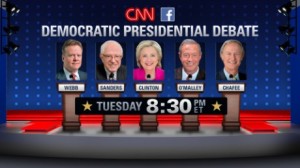 7. Chafee admits that if this doesn’t work, he’ll see which other political parties might accept him

6. Biden strides on stage mid-debate carrying a beer, slaps everyone on the back, and screams “Where’s the party?”

5. Webb and Hillary go mano a mano after a particularly nasty discussion of trade agreements; Webb carried out by EMTs during commercial break

4. O’Malley pretends to be from Massachusetts, then Nevada; finally breaks down crying upon admitting he’s from Maryland

3. Bill Clinton kicked out of the audience when close-up camera reveals him giving Hillary secret messages via his phone; turns out he was playing ‘Angry Birds’

1. Trump, jealous of all the attention, storms the stage and calls everyone ‘losers’