A group of terrorists have taken over a US government building as I write this.

They’re white, though, so I have yet to see a major news source call them this. 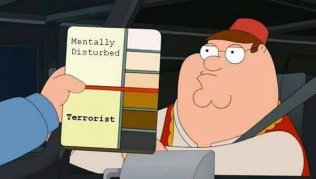 Not surprisingly, this group is related to that Master of Treason, Clive Bundy, the racist millionaire rancher who didn’t want to pay his fair share of taxes and somehow convinced the crazies that he was fighting for their rights.

These radical right-wing groups have decided that the US has tyranny. In their deluded mind, they think that allows them to commit treason. They think they’re being patriots when in actuality, they are the exact opposite of a patriot.

The problem is that their definition of tyranny breaks down to “the government has laws I don’t like.”

Well, tough. There are lots of laws I don’t like, and I try to get them changed. That’s what you do in a democracy, and you’re not always going to win — especially when your views are in the minority.

These deluded “patriots” compare themselves to the founders and the American Revolution, but the founders were fighting against actual, real, honest-to-goodness tyranny — a king, no less. They didn’t have the opportunity to vote in people who could change the law. They had no other option.

If the President of the United States ever declares martial law and the US army supports him in that (hint: that will never happen), then yes, that would be tyranny.

Anything else is just whiny babies with guns complaining that they didn’t get their way.