I, Michael A. Ventrella, being of sound mind and sound body, hereby endorse Trump for the Republican nomination. I urge all my Republican friends to vote for Trump. 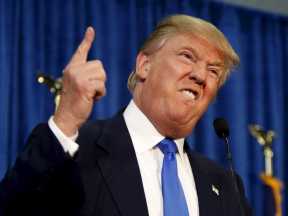 1.  If elected, he will be one of the least effective Presidents. Both Democrats and Republicans will refuse to work with him.

2.  He’s better than Cruz. I mean, seriously, everyone hates Cruz but what makes Cruz scarier is that he could possibly accomplish some of his evil plan.

3.  Trump really doesn’t stand for anything other than Trump. He has held liberal views in the past and is holding conservative ones now because it gets him attention. I’d rather have that than a religious crusader like Cruz who thinks he’s doing God’s will. Trump just thinks he’s God.

4.  If Trump is the nominee, every poll shows that the Democrats are a shoo-in. He’s the most popular among the extremists in the Republican party and of all the possible GOP candidates does the worst in a head-to-head match-up with either Bernie or Hillary. (Bernie does better against him in case you’re wondering.)

5.  With Trump as the candidate, the Democrat’s chances rise for taking back not only the Senate but also the House.

So here’s to Trump: Long may he continue to destroy the Republican party.

One thought on “I hereby endorse Trump for the Republican nomination”