I discovered a few years ago that I am a pescatarian, which means I don’t eat meat except for fish. I had never heard the term before that, and possibly it was made up around that time.

I stopped eating meat when I was in college in the late 70s, so no matter what my mother-in-law thinks, there’s nothing she’s going to say that I haven’t already heard that will make my wife and I change. 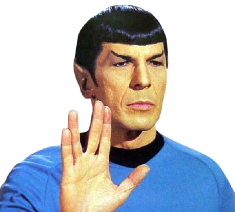 There are two main reasons I don’t eat meat.

First: health. Every reputable doctor will tell you that the less red meat you eat, the healthier you will be. Can’t get much less than zero, right? Seriously, remember those old food pyramids? Meat was at the top because you were supposed to eat it rarely, not because you were supposed to put it on top of your salad. Worse yet, most meat these days is shot up with chemicals and additives that make people sick.

Second: as a protest against factory farms. You know those torture prisons, where the animals can’t even turn around in their pens. I don’t like the idea of my money going to support them.

I also don’t want to be hypocritical about it. I’m not one of those people who cries about cruelty to dogs and cats while munching down on a hamburger. I don’t think we should make a distinction between cute animals and non-cute animals. They all feel pain.

So I’m happy with the announcement that they’re moving closer to cloning meat. If they can do it without additives and chemicals, all the better. We’re not talking about cloning an entire animal from birth (which should be treated the same as any other animal) — this is cloning a side of bacon, absent from the pig. Kind of scary and science-fictiony, but hey, that’s the direction we’re headed.

No animal is harmed, and, like a Star Trek Food Replicator, you can have meat every once in a while without causing pain to anyone.

Even Spock would call that logical.

4 thoughts on “Vegetarians and cloning”