“It’s heritage!” claim racists and people who don’t think. “This confederate flag — which wasn’t even the actual flag of the confederacy but was adopted as one by the Klan and other racists to symbolize their hatred — is just about our proud southern heritage!”

Sure, of course. That’s why you see so many people of color in the south flying it. Pride.

That’s why you see people who have never even been to the south flying it. It’s why you see northern Trump supporters putting it on their vehicles. It’s why a recent right-wing trucker protest in Canada had the Confederate flag flying. Canada! You know, that country that had absolutely nothing to do with the American Civil War.

Heritage. Sure. Of course.

Look, just come out of the closet already and admit you fly it because you’re a white supremacist. We all know it anyway.

I grew up in Richmond and went to college at VCU in the heart of the city. At one point, we had an apartment near the Virginia Museum and I’d ride my bike down Monument Avenue to go to class each day. (Suddenly I’m remembering having to ride home in a sudden downpour, hoping the books in my backpack didn’t get too wet.)

Anyway, even then, my friends and I knew those statues to traitors should not be there. We called Monument Avenue “the Avenue of Losers” (and I even worked that into my novel BLOODSUCKERS: A VAMPIRE RUNS FOR PRESIDENT which begins in Richmond).

So I’m glad to see that they’re finally removing the statues to the traitors, which were only erected by confederate sympathizers and racists during the Jim Crow days. You know — losers.

You want to idolize an evil man who owned other people and was willing to kill fellow Americans for the right to continue to do so? Fine, put the statue on your own property. This property — this avenue — belongs to us. We are refusing to use our money to support your evil on our property.

We should not be spending taxpayer money honoring people who rebelled and declared treason against that same government that now pays for the statues.

“It’s not honoring, it’s history” claim people who literally think that is a good argument. I don’t think it’s worth wasting my time explaining to these morons that we don’t honor bad history, and we don’t need statues to learn about history. (Somehow, we’ve managed to learn about World War II without a single statue of Hitler anywhere.)

So yeah, good riddance. Proud of my old hometown.

You ever notice that the people who complain about “political correctness” are never the ones that need correcting?

“I can’t believe they’re changing the Cleveland Indians to the Guardians!” a bunch of non-Native Americans are screaming. “How dare they get rid of Aunt Jemima!” say white people. “Changing fictional characters to become women is ridiculous!” say men.

“What do you mean I can’t use an insulting term about someone different than me?” they say. “That’s ridiculous. Those terms never bothered me any, so why is everyone else upset?”

Because it’s not about you. It’s true. I know, I know — sit down and consider the following concepts:

“We made Juneteenth a national holiday!”

“Great! How about that voting rights bill?”

“And are you voting for the police reform act?”

So after a week of protests, all four cops have been arrested, other cops are being arrested and/or investigated over their overreactions in other cases, Minneapolis may be disbanding their police force, other cities are demilitarizing their police, the Marines have banned Confederate flag symbols, Confederate statues are coming down, and even Republicans are starting to say “Black Lives Matter.”

But yet people are still saying “protests don’t accomplish anything.”

Every single black person you have ever met has a story to tell about how they were treated differently and how they are constantly wary of doing anything that some crazy karen or racist cop might take the wrong way.

Just like every woman can tell you a story about how she was mistreated, ignored, or passed over because of her gender.

If you’re not aware of that, then you’re part of the problem. (And maybe your “black friends” aren’t as close as you think they are if you are denying what every one of them experiences.)

I always thought the default position was to be against fascists. I’m proud to be anti-fascists.

I guess if you’re anti-antifa, that must make you fa.

“No!” some of my well-meaning liberal friends say. “They’re violent and violence is always bad!”

Well, first of all, let me roll my eyes in disbelief. Then, let me point out a few things:

Whenever I read “Lincoln gave the slaves freedom” or “Roe v. Wade gave women the right to their bodies” or “The Supreme Court gave gays the right to get married,” it always sounds strange.

If I steal your car and then return it, you don’t say “Michael gave me a car.”

Now that more information has come out about the confrontation with those Catholic boys and the Native American, it seems clearer to me that it went somewhat like this:

“We’re a bunch of spoiled boys marching to fight against women’s rights! We’re wearing our MAGA hats to show everyone that we’re bigots!”

“I am a Native American veteran and I will stand up to you peacefully.”

“We will defuse the situation by mocking native people and screaming ‘build the wall’ while doing a Maori dance! There, we’re the good guys here!”

Nah, not buying it. The fact that the veteran walked up to people who should be confronted doesn’t make him the bad guy here. He did the right thing. We should all be confronting the haters. 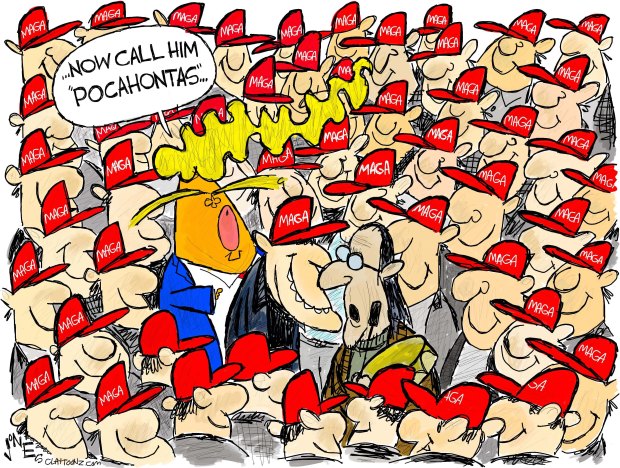 The Wall was never about security. It won’t stop immigrants from coming here (most of whom come by plane); it won’t stop the drugs — it’s just a way for the bigots in America, led by their Prime Leader Trump, to show their hatred of anyone not like them.

And he’s not even pretending any more. The latest tweet from him warns us that Muslim prayer rugs have been found.

Muslims! Be very very afraid! Despite the fact that the majority of terrorist attacks in America in the past ten years have been from white male Christians, Muslims!  They’re different from you! A lot of them are brown! Be very very scared and vote for Republicans who will protect you!

But hey, you know, when elected Republican bigots are asking why it’s wrong to be a white supremacist and when they’re hosting holocaust deniers in the capitol, I guess we shouldn’t be surprised.