“But he was the victim this time!” the conservative apologists for George Zimmerman whine when confronted with his latest shooting incident. This ignores the fact that this was not some random isolated incident but an ongoing fight he has been having with the shooter. 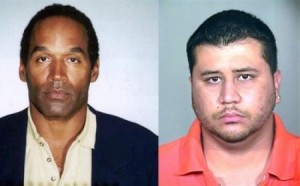 So! How many shootings have you been involved in? I don’t know know about you, but my total is creeping up to zero, just like the vast majority of people. How many shootings does Zimmerman need before you think that maybe it’s him? By my count, there have been about six that we know of.

For those of you who say “Leave the guy alone” you have to realize that to many of us, Zimmerman is this decade’s OJ Simpson: A murderer who, for some unfathomable reason, got away with it and yet still goes around acting like a thug criminal.

Ironically, many conservatives who are defending Zimmerman are the same ones who attacked OJ whenever he did something wrong, despite the similarities between the two.

I mean, they’re so similar yet these people treat them so differently like it’s a simple case of black and white!

Oh, wait. Maybe that explains it.