It’s bad enough that some conservatives are trying to pretend this latest attack had nothing to do with racism when the shooter himself told everyone before and during the attack that it was all about racism. It’s bad enough that people in South Carolina are pretending like this has nothing to do with a culture that rewards racism while flying the Confederate flag over the state capitol.

But we are once again getting the asinine argument that this all could have been stopped if only everyone had a gun.

Yes, that’s right — the solution to too many guns is more guns. 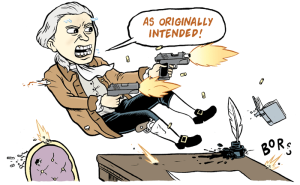 In this weird alternate fantasy reality, gun nuts are convinced that more guns will solve everything and if we have more guns, there will be less gun violence.

The numbers don’t lie — the NRA does though, all the time.

Somehow the idea that “An armed society is a polite society” appeals to these people. Think about it — these people believe that you need to be afraid of dying in order to be a polite person. What does that say about them?

This fantasy that “if we all had guns we could have stopped the bad guy” is also not supported by any facts. Oh sure, you can find that one-in-a-hundred example where that happened, but in the vast majority of cases, both sides having guns only escalated the matter and caused more deaths and injuries. Even trained police have been hurt and have hurt innocent bystanders in shoot-outs, so imagine what havoc untrained Billy Bob can cause.

Despite the facts, the gun nuts believe that if everyone had a gun, the good guys would always hit, the bad guys would always miss, no one would ever get hurt, and then the hero will walk away, put on a pair of sunglasses, and make a witty comment. That’s how it works in the movies, right?

This is the same mentality that believes torture is successful at getting information even though every single study ever done in the history of the world has found the opposite. But it works on “24”!

The inability to distinguish fiction from reality puts many people in secure hospitals. However, it is a requirement for being an NRA leader.