The buffer zone around funerals is three hundred feet, in a court battle that limited free speech of religious zealots.

The buffer zone of 35 feet around Planned Parenthood clinics was declared unconstitutional because of freedom of speech for religious zealots.

The takeaway from this is that dead bodies get more respect in the courts than women. 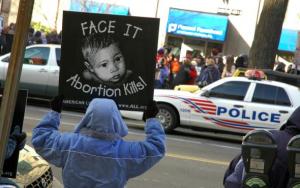 The decisions for these restrictions should be compared because, if these were just about where we are allowed to practice free speech, shouldn’t these buffer zones be the same? One would hope so. However, the behaviors of the two groups in question are entirely different.

Planned Parenthood is an organization that provides low cost OB/GYN care to women. This includes annual physicals, breast exams, and birth control. They do counsel women that abstinence is a way to avoid STDs and pregnancy, and they also counsel them on how to maintain your health in sexual relationships.  The organization fills a necessary role in the health care system.

About one percent of their services are for abortion. The other ninety-nine percent of women who go into their clinic are harassed by protesters for getting a breast exam.

Planned Parenthood protesters, allegedly aiming to protect life at all cost, have murdered in the name of their cause. These buffer zones were introduced after women were attacked not to limit the group’s speech, but to keep women and doctors from being killed.

Chief Justice Roberts wrote about the decision, “At each of the three Planned Parenthood clinics where petitioners attempt to counsel patients, the zones carve out a significant portion of the adjacent public sidewalks, pushing petitioners well back from the clinics’ entrances and driveways.”

How quickly Justice Roberts has forgotten the original intent of the laws, not to stop women from hearing a difference of opinion, but to stop them from being subject to harassment and violence that has come along with a lack of protection at these clinics. Given the current environment in which our senses have grown numb  with the news of weekly shootings, would we even bat an eyelash if a shooting happened at a Planned Parenthood?

Would Justice Roberts still want to protect free speech and give groups right to “counsel?”

Conversely, Westboro Baptist is guilty of spewing extraordinarily hateful and unpopular opinions, but they have never threatened or harmed somebody.  Given that the buffer zone has been declared unconstitutional at Planned Parenthood, a non-violent protest group has now legally been given an infinitely bigger buffer zone than the violent one.

Why are we giving a group that has a history of violent protest unfettered access to women who are trying to see a doctor?

As a woman who has been harassed en route into an annual doctor’s appointment because my doctor held some of her office hours at a Planned Parenthood, I thoroughly enjoy that my cozy OB/GYN’s office in Orange County comes with a koi pond and wifi. It’s a world removed from that cloudy day when protesters screamed at me in Boston.  Every woman should have that right to feel safe when walking to a doctor’s office.

And under law, shouldn’t there at least be as much protection granted to women as to a dead body?

Yvette d’Entremont is a forensic chemist and writer living in Southern California. She enjoys running, baking cupcakes with bacon in them, and cuddling her cat, Lexi (but really, she’s a dog person). She’s currently working on a crime novel in her free time and you can follow her antics on twitter @yvetteguinevere and on her Science Babe website.

9 thoughts on “The dead have more rights than women”