Avowed socialist Bernie Sanders has announced that he is running for President.

He doesn’t have a chance of winning. He will only raise a fraction of what Hillary already has in her war chest. He doesn’t look like a President and that New York Jewish agitator vibe won’t help him in the slightest with most of the country. 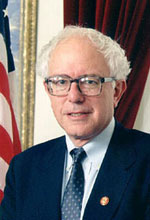 So why is he doing this?

To bring up the issues Hillary is trying to ignore. To make income equality a centerpiece of the campaign. To talk about the failed war on drugs and our overcrowded prisons and the need for a single-payer health care system. To get rid of Citizen’s United and have campaign finance reform. To make sure the Democrats actually stand for something other than just getting elected.

And you know what? Despite what some Hillary supporters are worried about, this should help Democrats win. These issues are not radical left-wing crazy ideas. Poll after poll show that these are mainstream views, shared by a majority of Americans. These are the issues that the moderates like.

We don’t need to appeal to those hard-core Democrats who are excited to elect the first woman President. We don’t need to appeal to the political junkies on the left (like me) who will always come out and vote no matter what. We need to excite the people in the middle who would just as soon stay at home than get out and vote. We need to give them a reason to want to vote.

Playing it “safe” and ignoring these issues breeds apathy. There are more Democrats than there are Republicans and when we lose, it’s not because the Republican positions are more liked by the population; it’s because we don’t vote.

So give Democrats a reason to vote. Get them excited.

And then we lose.

6 thoughts on “Bernie Sanders for President?”