The Monkees are #1.  No, really. They hit #1 this weekend, 50 years after their original appearance. 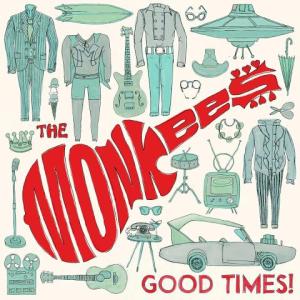 The Monkees were highly influential on me as a child. While some kids in the 60s wanted to grow up and be astronauts or James Bond, I wanted to be in a rock and roll band where we all lived in the same house and had wacky adventures. So I taught myself to play guitar and was in a number of bands over the years (as the bassist). Strangely enough, one of my college bands — the Naughty Bits — actually ended up pretty much all living in the same house (except for the drummer who was still in high school). We practiced in the basement. Our adventures weren’t quite as interesting, though.

Anyway, the music of the Monkees influenced me a lot more than the TV show. How could the music not be good? They had the greatest songwriters and backing musicians available at the time, and the guys in the band had something to do with it as well. (That’s Mike’s guitar work playing the hook on “Pleasant Valley Sunday” and Peter’s keyboard making the difference on “Daydream Believer” — not to mention the influence Mike had on creating “country rock.”)

They had some reunion albums every now and then that weren’t very good, but they’ve learned their lesson. The new album enlists some of the best songwriters of our day — people who, like me, were influenced by the Monkees. There are songs from Andy Patridge (XTC), Rivers Cuomo (Weezer), Noel Gallagher (Oasis), Adam Schlesinger (Fountains of Wayne), Paul Weller (The Jam), and Ben Gibbard (Death Cab for Cutie). They dug up some old songs that were written for the show and never completed from Neil Diamond, Carole King, Jeff Barry, Harry Nilsson and Boyce & Hart. And then Mike, Micky and Peter contributed songs as well.

Most people only know the hits from the sixties, but there are some great album tracks that should not be missed.  In no particular order:

The Porpoise Song was a single,  but it bombed — which is sad, because it’s a great piece of psychedelica written by Carole King and Gerry Goffin. This was the theme of their movie “Head.” That’s Leon Russel on keyboards, by the way.

The Girl I Knew Somewhere was the B-side to “A Little Bit Me, A Little Bit You” and never appeared on any album until some greatest hits collections came along. Written by Mike Nesmith, this was the first song that the Monkees really played on. Peter’s keyboard solo is quite good.

Shorty Blackwell was Micky’s masterpiece — he wrote it about his cat. There are many parts to this song, with shifts in tempo (it even goes into 5/4 at the end).

Goin’ Down was the B side of “Daydream Believer” — it’s written by all four Monkees with Mike and Peter playing guitars. Micky is amazing here.

Daily Nightly was written by Mike and, as was his way at the time, has trippy words that don’t really mean anything. Micky plays the brand-new Moog synthesizer making its first appearance on a pop record.

Mommy and Daddy is Micky’s protest song, but the record company made him rewrite and re-record the strong lyrics (“Ask your mommy and daddy who shot JFK”). Here’s the original version:

While I Cry is one of Mike’s better written “country rock” songs, with clever lyrics, more than one bridge, and then it ends just at the right time before it could become boring.

Star Collector is another one written by Goffin/King. This one’s about groupies — something Davy certainly had experience in when singing this. Davy was my least favorite Monkee — too much Broadway, not enough rock and roll — but he handles this one just fine. There’s a long solo at the end that was the second use of synthesizer on a pop record.  The version below is the long version you never saw on the TV show.

Long Title: Do I Have to Do This All Over Again was written by Peter. I like the way it’s organized, with a different lead section than the rest of the song, and with a great bass line. Nice title, too. This is from the “Head” movie.

Auntie’s Municipal Court is another one written by Mike, with meaningless words and a title that has nothing to do with the song. They were indeed smoking a lot of strange weeds in those days.

Bonus #11: Randy Scouse Git. I didn’t know whether to include this or not. It’s one of my favorites — another one written by Micky. I wasn’t sure if it was obscure enough for this list, as it was a big hit in England of all places (where they demanded an alternate title since “Randy Scouse Git” was a bit too crude in British slang for a teeny bopper audience). Micky, bowing to record company demands for an alternate title, renamed it “Alternate Title” for the impressionable youth there.

EDIT: If you want to read more about my opinion on Monkees songs as well as lots of background information about each song, get my latest book!