I keep hearing claims that the bigotry and xenophobia were only the motivating factors for a small amount of Trump’s voters. I don’t buy it. Don’t get me wrong, I’m sure most of them weren’t in the KKK and white supremacy groups (but I’m equally sure that people in those groups absolutely voted for Trump in huge numbers) but I don’t buy that race wasn’t a factor.

Here’s the thing about racism: it’s not always overt. Not even in ourselves. You don’t have to be wearing a white sheet or yelling “white power” or even be dropping the n-bomb to be a racist.

I grew up in rural PA. I grew up around people who would be highly offended if you called them racist. “I judge people based on their actions, not their skin color,” they’d say. I’d hear the same people later lament how an area was ruined because “those people” moved in, or lament getting lost in a black neighborhood as being “in the darker side of town.” Guess what: they’re racist. 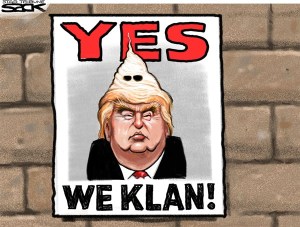 I wish I could say I was immune but I wasn’t. When I was younger and figuring out the world, I harbored racist thoughts and ideas. Not like “hang black folks” or anything quite so overt, but I’d find myself more on edge if a black guy was walking down the street, when I was a kid working at a gas station I found myself watching the black kids who came in to ensure they wouldn’t steal anything. At the time I told myself it was because they were kids. “It’s not because they’re black,” I told myself. “I worked with a black guy, he’s a good guy and I like him.” That wasn’t true though, it was because those kids were black.

I’ve grown up since then, I’ve faced the misconceptions and lies that perpetuate that garbage and worked to identify and change my thinking. I was fortunate to be exposed to different thoughts and ideas by going to school which had a little bit more diversity than my home town (it was a local school after all) and then move to a city with a lot more diversity. Even still, it was work. I had to face that those thoughts and feelings were there and I had to examine them. I have to examine why I think and feel the things I do (on race an other topics). And it’s not over — bettering yourself never ends, it’s constant journey.

My point is: White folks who voted for Trump and his vile rhetoric — it was probably a lot more racially motivated than you realize. You really need to ask yourself some hard questions. It’s never too late to start being better.

Now, with all that said, not everyone who voted for Trump was a racist (self-realized or otherwise.) Not as many as claim it, but they’re out there. Some genuinely felt he was the candidate that would turn their economic misfortune around. There’s really no basis to believe he’s the guy who can or will do it, but that was their overriding motivation. And I get it, I really do. I only moved out of PA in 2006 because I was utterly unable to find a job, good or otherwise, and I found one here. I have seen the effects the housing market crash still has on my hometown whenever I go back. It’s bad out there. People are struggling to make ends meet. I’m one of them, even though Boston is doing better economically than PA.

But here’s the thing (and I know I’m about to invoke Godwin’s Law here but please stick with me, I’m almost done).

Germans voted for Hitler in 1932 primarily because of his promises to revive the economy (by vague and unspecified means), to restore German greatness, and overturn the Treaty of Versailles. His stance had been anti-Semitic since the moment he entered public life and he blamed them (along with Bolsheviks and liberals) for the nation’s ills.

I’m sure lots of the supporters of the Nazi party in the 30’s would say that they sought only to do better economically because they (and the rest of the world) were struggling, but not because of Hitler’s vile views on Jewish people. Sure, some hated the Jews, but not all of them. Some of them may have been lying to themselves, but I’m sure some were genuinely repulsed by his anti-semitism.

Unfortunately, I can’t give that defense any more credence than I do to those who claim in 2016 that they voted for Trump only because of their economic hardships and not his vile rhetoric.

Why you opted to elect an openly bigoted and misogynistic man who advocated attacking the rights of other human beings (as well as actually attacking women) is utterly irrelevant. You did it. You decided that your self interest was more important than the basic human rights of people who look, love or worship differently than you.

To my friends and family (and anyone else really) I say this: you are responsible for what he does next. If you care for the people he and his team have vowed to take rights away from you must hold him accountable and speak out when he does it. You must defend them and you must ensure that legalized discrimination and hate does not worm its way into our nation more than it already is.

And if you don’t — if you don’t care about those people just because they’re different than you — then, I’m sorry to have to tell you, but you’re a bigot.

Hoyce is a Boston-based transplant from the Pocono Mountains. Although he has a degree in History with an emphasis in Political Science, most of his writing tends to be for fantasy gaming or occasional posts on Facebook. He recently started a blog about gaming and posts updates on a strict schedule of “sometimes.” You can read his far less serious thoughts there at https://hoycesgaming.wordpress.com/.”

4 thoughts on “Trump and the hidden racism inside us”