Would Bernie have won? I don’t know, and neither do you.

What I do know is that Hillary didn’t.  Mind you, that was because of the Electoral College — the majority of Americans wanted her by a pretty big margin.

But would Bernie have attracted more votes in Pennsylvania, Michigan and Wisconsin, thus guaranteeing a win? Hillary’s losses in those states was within 2%.  These are states with large populations of working-class white voters who felt (wrongly) that the Democratic party had abandoned them. 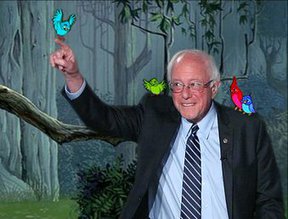 When I suggest that Bernie could have done it, I am often knocked down by those who point out all his negatives and say the people would never support him. Many made the same argument a year ago during the primaries. These same people predicted with confidence that Trump would never get the nomination.

The fact is that we don’t know. This year has turned everything topsy turvy. The traditional rules I learned when getting my Political Science degree and in all my years of working on campaigns were thrown out the window this year. Nobody knows anything.

Pointing out that he lost the primaries to Hillary isn’t convincing. Primaries involve a small percentage of the voters, and are almost always the insiders and most active of the party members. Hillary had already wrapped up many of them years beforehand. In any event, winning among Democrats doesn’t mean much because in order to win the final election, you have to reach independents and even some Republicans. Hillary’s negatives among those groups was high, Bernie’s wasn’t.

We often criticize Republicans for living in a “bubble” and ignoring facts that are inconvenient, but Democrats do that too. The Democratic bubble has to do with dismissing non-liberals as rubes or ignorant rednecks or people in the fly-over states that don’t matter. It has to do with ignoring how much people didn’t like Hillary, whether justified or not.

Perhaps a different candidate — one that could appeal to the working class as well as the “liberal elite” in the big cities — could have made a difference.