It’s amazing how real, solid evidence (including indictments, arrests, convictions and guilty pleas) will not convince these people but the wildest conspiracy theories are swallowed whole without a thought.

Trump supporters are still chanting about Hillary while Trump stands with Putin and, despite the findings of the FBI, CIA, and every intelligence organization in his own country, claims that there was no Russian interference in our election.

(Mind you, I’m a criminal defense attorney, so I’m used to guilty people doing their best to discredit the police. I’m just not used to the President of the United States doing it.) 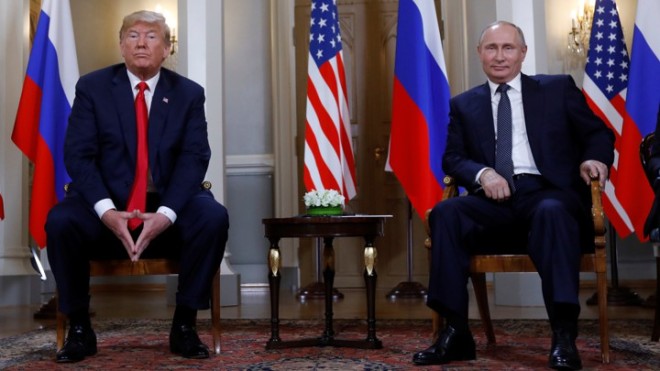 Putin’s look is one of a man thinking “I’ve got Trump’s balls right here in my pocket.”  (Photo credit: KEVIN LAMARQUE / REUTERS)

Here’s the thing (as I’ve said before):

It’s one thing to be ignorant. That’s not the same thing as being stupid. Everyone is ignorant of something. I’m ignorant of sports teams, fashion, and nuclear science.

But ignorance can be cured with education, and knowing you are ignorant of something is good.

The sin is in being willfully ignorant — in refusing to seek out facts or refusing to acknowledge them because it might change your already held opinion.

But the Trump people refuse to believe, despite the indictments and guilty pleas already handed down.  Instead of believing Mueller, who helped to bring Enron, Gotti and many mafia gangsters to justice and whose reputation is untarnished, they rely on Fox News or Trump, whose reputation for truth and facts is undeniably absent.

Sometimes I think this isn’t really a fight between right and left or right and wrong but informed and ignorant.

2 thoughts on “A perfectly treasonable explanation”