“Oh noes!” scream some Democrats. “You can’t threaten a filibuster against Gorsuch! They might use the nuclear option to get rid of that rule, and then they can do anything they want. Save the fight for later.”

I could not disagree more. Putting aside the argument that Gorsuch would be a terrible justice who deserves to be voted down, let’s just talk political strategy. 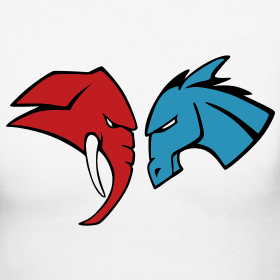 Here’s the thing — “When they go low, we go high” doesn’t seem to be working. We’re like the kid who refuses to fight back who is constantly being beaten up by the bully. Well, I’m tired of being beaten up. We need to fight the bullies and teach them that they can’t keep getting their way just because they’re willing to fight and we’re not.

Idealism doesn’t do you a lot of good when you’re fighting bad guys. “Please Mr. Hitler, don’t hurt us” didn’t get us anywhere.

The more the Democrats fight now and make Trump look like a big loser, the more they’ll make it clear that they’re not going to just give in and let him do everything he wants. They’re going to block every damn thing he tries to do.

Oh, Republicans don’t like that? Let’s see — where did that plan first originate? Oh, right, with the Republicans blocking every thing Obama tried to do, including bills that the Republicans themselves originally proposed that they later had to block simply because Obama agreed with them. I am not making this up.

You don’t give in to evil. You don’t allow the minority to trample the rights of the majority. (And, let’s be clear, Trump and his people were not and still are not supported by the majority of Americans.)

As my friend Hoyce pointed out, the way some Democrats argue about picking your battles would be as if Churchill had said during WWII, “We won’t fight them on the beachhead, we can’t win that. And we’ll probably let them take about half the streets, we have to pick our battles. But once we find a spot where we can win we’ll totally fight them all out.”

Somehow, I don’t think a quote like that would have made it through history.

Last year, Obama nominated a highly-qualified person to the Supreme Court but the Republicans, using their “block everything” strategy that they’d held during all eight years of the Obama administration, refused to “advise and consent” as the Constitution requires and didn’t even hold a single hearing on the nominee — something completely unprecedented in American history.

Now they’re upset that Democrats are planning to do something similar to them.

Oh, you big babies. You can dish it out but you can’t take it.

“But this is different,” they say. “We didn’t think the President should appoint someone when there was an election near, because they people should decide this.”

Well, guess what? The people did decide. The people supported Hillary Clinton by a pretty big margin. The Electoral College may have decided differently, but that’s not what you said. The majority of the people didn’t want you or your President to pick the next Supreme Court Justice.

How’s this, then? The President shouldn’t appoint a Supreme Court Justice when he is being investigated for treason. Isn’t that much better reason to deny it? Oh, right — it’s very different when it’s your leader who is accused of crimes that could have him impeached and removed soon.

Typical Republican logic:  “Never hold us to the same standards by which we hold you!”