Nobody is saying that!

I am so sick of these kinds of arguments:  “Oh, so you want $15 an hour for flipping burgers when our firefighters get paid less than that?  Who do you think you are, scum?”

Stop making those stupid comparisons! No one asking for a decent wage for a crappy job of standing over a boiling vat of fries for eight hours a day is saying that they are the only ones underpaid. Fast food workers are underpaid and our military is underpaid. These concepts are not mutually exclusive.

Why can’t we all admit that a large percentage of our population is underpaid? Until Reagan dismantled our economy, whenever things improved, salaries increased for everyone, upper and lower class. Now an improved economy only benefits the 1% at the top. Can’t we all agree that pretty much everyone needs a salary increase?

After all, the money to pay firefighters doesn’t come from McDonald’s anyway. Raising the wage for hamburger flippers won’t decrease other people’s salaries. Let’s lift everyone up. And even if we only lift some up at first, it doesn’t mean others don’t deserve it, too and should also be lifted as soon as possible.

But this is what they want — they want us fighting over the scraps because then we’re ignoring the huge wealth inequality that really exists in our country, and it’s not about whether someone should get a few extra dollars an hour.

But back to the main point: Stupid comparisons. I’m seeing way too many of these.

“Caitlyn Jenner is brave.” “Yeah, well not as brave as these soldiers!”  Yes, we know. No one said she was. It is possible for more than one person to be brave, you know.

“Black lives matter.” “All lives matter!” Yes, of course all lives matter, but sometimes we need to bring attention to some of them! It doesn’t mean they are the only lives that matter!

I mean, seriously, it’s gotten out of hand. As one comedian said recently, these kinds of arguments are like someone running into a fundraising event to fight cancer and yelling, “There are other diseases, you know!”

“I had to work three minimum wage jobs to get by, and I made it, so I don’t see why minimum wage should be increased!”

This is a mindset I have never quite understood — things were bad for you, and therefore we shouldn’t try to make them better for other people?

But today I want to discuss that attitude. Can someone explain it to me? I’ve seen it many times, always from some conservative who thinks that we should lower our standards instead of raising them.

“Those damn unions want to increase wages and working conditions!” they scream. “Why should they get paid so much more than I do?” Well, that’s a very good question. Maybe you should be unionizing too so that you could get paid a better wage.  Why not raise everyone up instead of bringing others down?

Why can’t we increase standards instead of aiming for the lowest common denominator?

Your tax dollars are being put to good use, allowing the 1% to get even richer on the backs of the poor. By refusing to raise the minimum wage to even meet the rising costs of living, there are people in America who work full-time and yet cannot make ends meet.

People who work full time should not be relying on welfare and food stamps to make ends meet when corporate profits are at their highest they have ever been. (This is not an exaggeration.) Because the businesses aren’t paying a working wage, you and I are picking up the extra costs. Well, you wouldn’t expect those CEOs to give up their third homes in Bermuda now, would you?

Raising the minimum wage also helps the overall economy. Duh. If people have more money, they spend it, which means businesses improve and then they need new employees, which stimulates the economy even more. Money trickles up, not down. You help those at the bottom improve their lot and it helps everyone, not just those at the top.

And yet, every time someone suggests raising the minimum wage, businesses whine that it will destroy the economy. They said the same thing about getting rid of child labor. And imposing a 40-hour work week. And having work safety regulations. And getting rid of discriminatory hiring practices. And so on and so on. Somehow, we’ve survived.

This post could fill a book talking about the economy, but mostly I just wanted to rant a bit and present the graphic above. And also this great They Might Be Giants song:

No, I’m not forgiving them for paying their employees minimum wage when they could easily pay them $11 an hour and give them all health insurance and still make a hefty profit.    Not only would that be the right thing to do, it would also help the economy (money trickles up, after all — if people have money, they spend it.  Amazing, but true).   Instead, Wal-Mart admits their employees are basically living in poverty, and some stores are even holding food donation drives for the employees. 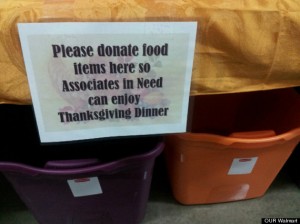 However, instead of criticizing them for that (which is well deserved), today I want to defend them against the “closing on Thanksgiving” thing.  There is a boycott proposed against them (and other stores) for making their employees work on Thursday.

Lots of places are still open on Thanksgiving, because we the people want them to be open.  Someone always remembers a last minute thing they need and they run down to the grocery store and are happy when it’s there.  (Remember:  Wal-Mart has groceries, too.)  Many gas stations remain open (which you will be thankful for when you get halfway to grandma’s and realize the tank is empty).  And of course, some people never get holidays off (hospital workers, police, emergency services).

But really, we’re the ones to blame.  If we didn’t create the demand, they wouldn’t be filling it.

So the protests I see now asking people not to shop on Thanksgiving are good — because it puts the onus on us.  We’re the ones ultimately responsible for stores opening on holidays and at 12 am on Black Friday and so on.

Of course, one of the reasons for the protests is that Wal-Mart treats their employees terrible.  If they paid them well and gave them overtime for working holidays, you probably wouldn’t be seeing these protests.  So while we can blame ourselves for wanting these places open, we also need to keep in mind that the companies themselves can soften the blow to the point where employees will want to work on the holidays for all the extra benefits and money.

Today is the day that the United States starts cutting food stamps for the most needy among us.

Most people on food stamps are not lazy moochers — most work full time for minimum wage.

That’s right — you and I are subsidizing McDonald’s. Not only do we pay subsidies to meat producers to keep the cost of meat cheaper than the cost of a salad, but we also are helping McDonald’s make record profits by picking up the slack for people who cannot afford basic necessities on a McDonald’s salary. (Note: I am using McDonald’s as an example; feel free to plug in whichever minimum wage place you wish.)

Republicans, who just spent billions on the government shutdown, feel that we just can’t afford it. So instead of cutting corporate subsidies, they attack those who actually need our taxpayer money. Instead of raising dollars by increasing the tax burden on the super-rich who can afford it, we’ll instead cut a few pennies from the super-poor.

And of course many Democrats also take the blame, because they don’t want to cut the corporate subsidies either — after all, that’s where their campaign money comes from. None of those McDonald’s workers help them get elected, but McDonald’s Super PAC can make a big difference at election time.