If you’re honest and sorry and accept blame for what you’ve done, you will do the honorable thing and resign.

If you refuse to admit you’ve been wrong, blame your enemies, and behave in an amoral way, you get to keep your job and may even get elected to prominent positions.

This is the contradictory lesson our leaders are sending us. 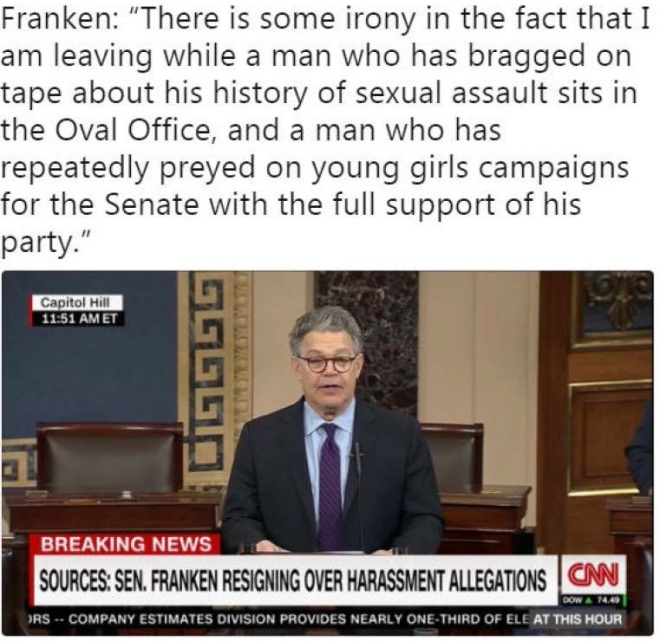 Al Franken resigns for inappropriate touching, almost all of which was in public with witnesses while pictures are being taken, while on the GOP side, people who have committed the kind of creepy crimes that would normally place one on sexual offenders’ lists are promoted by the party.

I’m getting tired of playing by the rules and doing the right thing while political opponents are playing by different rules.

They’re like the bullies laughing at us do-gooders while they destroy us behind the scenes. You can’t win the game if they’re playing hardball while we’re playing softball. I’m just tired of having the sand kicked in our face and replying by turning the other cheek. All it does is make them kick us harder next time.

While I think Franken should have been censured and perhaps removed of a few important committee assignments, I can also understand his dilemma:  Had he stayed on, there would have been an investigation and the Republicans would have milked this for everything they could in order to destroy him and the Democrats (while completely ignoring their own more serious transgressions because, of course, they are all flaming hypocrites).

So perhaps leaving and setting an example was the best thing he could do, because, if nothing else, it allows the Democrats to be the party of morals and “family values” for the 2018 election.