It didn’t take long for many states to once more start up their voting suppression drives. Admittedly, some of the examples in the article above are merely politicians talking about doing it (and maybe nothing will come of it) but still, it seems to me that they’re saying “Yee haw! The sheriff is gone! Now we can do whatever we want again!”

This kind of talk really scares me. We should be doing everything in our power to get people to vote, not prevent them from voting. We’re not talking about needing an ID to cash a check, we’re talking about the most basic right we have in America, upon which all other rights are based.

All of these voter laws start with the premise “People are voting who shouldn’t.”

The proper response is, “Yeah? Prove it.”

Until I see evidence that this is indeed a problem (real evidence, not anecdotal and not just one example some election cycle where 100 million people voted), I fail to see why we need a “solution” that only discourages and prevents actual citizens from voting.

If the “we must have these laws to keep everyone honest” brigade was made up of people other than Republicans who have admitted, on the record, and in recordings, that the purpose of these laws is to keep Democrats from voting, then maybe I’d give it more credence. But to me, it just looks like Jim Crow back again, and this time with the Supreme Court’s blessing. 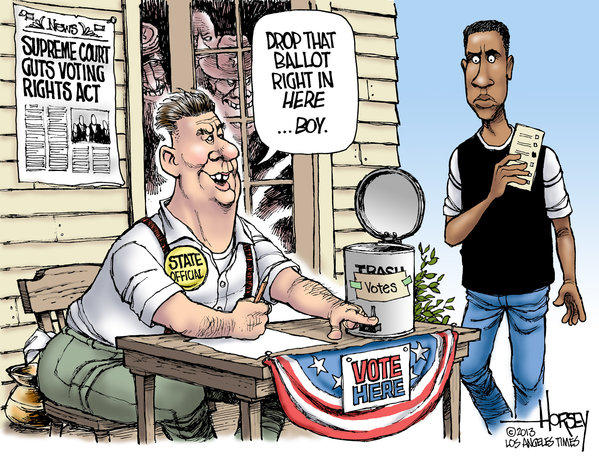 Note: this was first posted last March, long before the decision became public. Like anyone was surprised by Scalia’s opinion.

I was thinking all day about what I’d say about this latest Supreme Court decision … but couldn’t say it any better than Justice Ginsburg’s dissent, which was so biting that it caused Justice Alito to roll his eyes (because, you know, women! What do they know about the law, am I right, guys?).

“Congress approached the 2006 reauthorization of the VRA with great care and seriousness. The same cannot be said of the Court’s opinion today. The Court makes no genuine attempt to engage with the massive legislative record that Congress assembled. Instead, it relies on increases in voter registration and turnout as if that were the whole story. Without even identifying a standard of review, the Court dismissively brushes off arguments based on ‘data from the record’ … One would expect more from an opinion striking at the heart of the Nation’s signal piece of civil-rights legislation.”

She then listed many many examples of how the law had been used just in recent history to prevent discrimination, thus proving that it is needed.

Basically, the majority did what conservatives call “judicial activism” which they claim to hate (except when they don’t). This was a law that had been held Constitutional previously, and (as Ginsburg points out) was a re-enactment of an already existing law. The majority ignored the many examples Congress gave when it passed the law, and instead imposed its will over the elected officials and decided we didn’t need the law. That’s not what the Court is supposed to do.

What the majority said, when you boil it down, was “We agree there is still discrimination, but we don’t care.”

So now the floodgates are open. If you think Republicans had been trying to keep people from voting in the past, you haven’t seen anything yet.

The Republican party has won the popular vote only once in the last six presidential elections (when Bush won by a razor-thin margin). They have a huge uphill battle, and it’s not getting any better for them. The population is changing, and the old angry white man vote is dying.

Look at the electoral college voting patterns. You need 270 electoral votes to win. If we count every state that has voted Democratic in the last six elections, the Democrats start off with 242 votes, and the Republicans have 206. If you count only the last two, the Democrats have 332.

This is bad news for the Republicans, which leaves them with two options: (1) expand their base by appealing to younger voters, women, and minorities; or (2) cheat.

As we have seen, they have decided to go for option 2. Republicans have instituted voter purges and intimidation, creating hardships for those in Democratic-leaning districts and causing long lines to discourage voting. They’ve fought against early voting and other methods which will encourage people to exercise their rights. They’ve gerrymandered districts in ways that keep Democrats from winning.

They’ve created a propaganda machine to convince people that voter fraud is taking place (quite ironically). They’ve passed laws making it harder for people to register and vote. And they’ve challenged the Voting Rights Act in court.

Because, let’s face it, the only other solution would be to actually listen to the will of the people.