It’s hard to debate with people who are convinced that the United States is becoming a tyranny.

Does anyone really believe that Obama will say, “I’ve decided to suspend elections and remain President-for-Life”?  Do you really believe the military, who swear an oath to the Constitution and not the President, will go along with this?  Do you think all the politicians who won’t even pass a simple jobs bill for Obama will roll over at this?  Hell, can you imagine Hillary Clinton deciding she’ll go along with it?

It ain’t gonna happen.  But some paranoid people who probably should be taking some sort of medication think that basically “If I don’t get my way, then clearly this country has become a tyranny.”

There are a lot of things our country does that I don’t like.  And I think the President has become much too powerful (but that has been going on for generations).  But the chance of anyone turning our country into a tyranny is next to zero.  Calm down already.

This usually comes up with gun debates.  Gun owners who feel that their rights are being trampled cannot understand that the vast majority of Americans disagree with them.  Even the Supreme Court disagrees with their interpretation of the Constitution.  Only 13% of Americans in the latest Gallup poll think there are too many gun control laws.  49% say there aren’t enough, and the rest think it’s just fine or have no opinion.

As I stated previously, the way you get change in the US is by getting the population on your side and voting in change (through referendum like the ones legalizing marijuana and gay marriage), by electing politicians who agree with your views, or by bringing lawsuits to protect your rights and affect change. 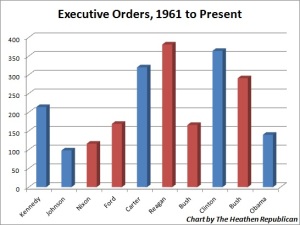 Sometimes your viewpoint will lose.  That’s how it works in a democracy.

So just calm down.  There are indeed issues concerning our personal rights and liberties that we should be worried about with the government.  But we’re not going to become a tyranny.

16 thoughts on “No, we are not moving toward a tyranny”