Often, religious folks complain that atheists are “intolerant” towards their religion.

Strangely enough, these atheists seem to be only “intolerant” toward Christians. Why is that? 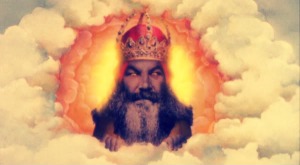 Amish aren’t trying to pass laws to make us give up electricity.

Wiccans aren’t trying to make us say “One Nation, under the Goddess.”

But some Christians want to ban all abortions, make gay marriage illegal, restrict contraception, edit history books, enforce prayer in schools, and all because of their religious beliefs.

So when atheists say “No” to them, that’s not intolerance. That’s fighting against tyranny. That’s standing up for what America was founded on — freedom to believe or not believe. To have a secular country.

All the atheist “fights” are defensive. Atheists are not doing a thing to prevent religious people from practicing their religion however they want to. They’re just trying to stop them from making us all do it.

EDITED for clarification:  I mean legal and political fights, not arguments and debates.

One thought on “Atheists are “intolerant”?”