I had a nicer headline originally but you know, this better expresses my feelings.

The United States Supreme Court yesterday denied the Kentucky clerk’s appeal wherein she claimed that she should not be forced to perform her job because of her religious beliefs.

As a Christian, she has vowed to obey the Bible, which says gay couples should not get married. (It actually doesn’t say that at all, but that has never stopped True Believers). She is still refusing to do it. 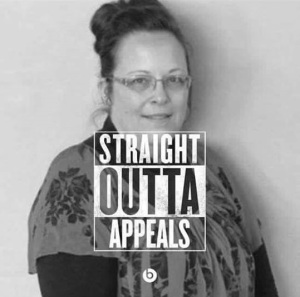 As a clerk, she is supposed to certify marriages and not discriminate, but she is claiming that God’s Law supercedes American law. (It actually doesn’t, but that has never stopped True Believers.)

All the standard hypocritical nonsense is there — for instance, she’s been married herself four times (which actually is prohibited very clearly in the Bible).

No, this is just plain bigotry.

But back to this woman: I’m sure she has firmly held beliefs. But if those beliefs prevent her from performing her job, then she should resign. Issuing marriage licenses is part of her job requirements.

Can you imagine if you refused to perform part of your job because your religion said you couldn’t do it?  How long do you think you’d keep your job?