Let’s get that straight now. Obama did not “re-name” the mountain. He removed the fake name that had been placed on top of the mountain’s real name.

The mountain had been called “Denali” (“the Great One”) by the natives for centuries until someone decided to name it after a President who had never even been to Alaska. This was done against the wishes on those in Alaska at the time. The move to make the official name “Denali” began back in 1975, when the Alaska legislature asked the President to change the name. And currently, the change has the support of the majority of Alaskans — most of whom are die-hard Republicans. In fact, Republican Senator Lisa Murkowski, a Republican, supported the change, and was happy for Obama’s decision, saying this a few days ago:

“For generations, Alaskans have known this majestic mountain as ‘the great one.’ I’d like to thank the president for working with us to achieve this significant change to show honor, respect and gratitude to the Athabascan people of Alaska.”

Had George W. Bush done this, I’m sure Fox News would be falling over themselves to congratulate him, but since this came from Obama, you can predict what happened — I don’t even have to post links to the comments, you can make them up yourself and they probably won’t be as crazy and outlandish as the real ones. They sort of sound like this (fake) meme: 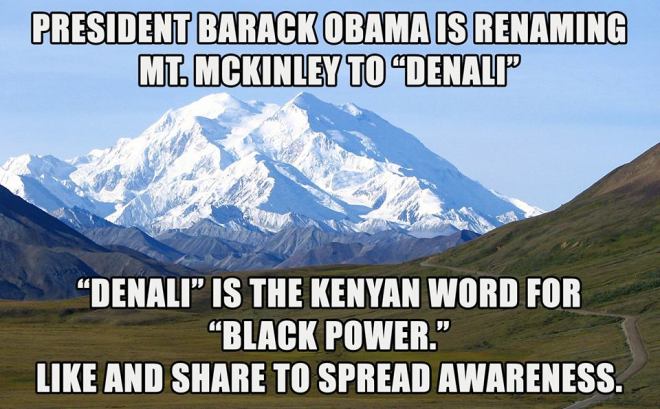 But there are indeed idiots who apparently believe this, enough so that Snopes had to have an article debunking it (noting, among other things, that there is no such thing as a Kenyan “word” since the official languages of Kenya are English and Swahili).

3 thoughts on “Obama did not rename Mt. McKinley”