Carly Fiorino has made a name for herself by repeating a lie about Planned Parenthood selling baby parts, based on a false video that even its creator has admitted was a lie.  The rest of the GOP candidates haven’t called her out for this, and in fact have repeated other lies about PP while spending much of their time talking about how evil PP is for doing a perfectly legal medical procedure. 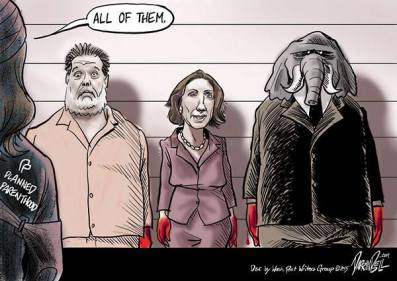 And people listen. They do. Of course they do — that’s the whole point. That’s why Planned Parenthood facilities all over the United States have been the subject of vandalism, arson, and shootings.

So when another one of those crazed loners who listens to them kills those “evil people” it’s hard to deny that it is because of the things that crazed loner heard those people say.

Unless, of course, you’re a liar to begin with. Then it’s easy to deny facts. After all, what’s one more lie?

These liars are now throwing up all sorts of lies to distance themselves from this guy.

“He was a trangendered leftist activist,” said Ted Cruz — because, you know, when you think of those transgendered leftist activists, what comes to mind are crazed loners who have crosses all over their walls living in a trailer surrounded by guns in the middle of nowhere. It’s practically a cliche.  In the real world, rational people can’t deny that the shooter was a right-wing conservative Christian, based on stuff found in his home and reports from his ex-wife.

“This was a bank robbery gone bad,” goes another lie, repeated often by Fox News, only because this happened next door to a bank. They can’t quite explain why the shooter was saying “No more baby parts” during the botched bank robbery though. (The local police, by the way, have called this a “politically motivated shooting” and deny that there was a bank robbery at all.)

And then they continue to lie about the baby parts.

I guess that’s what happens when you’re addicted to being a liar. Once you start, it’s hard to stop.