A recent trend in law has been to punish people for thinking in ways we don’t like.

The way it usually works is this: People who get into fights or threaten others because of their race or sex or religion or sexual orientation can be charged with crimes usually called “ethnic intimidation” and the like. 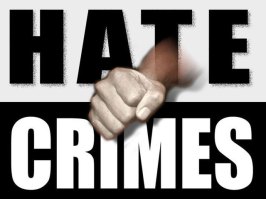 See the distinction? We’re now making it a crime to have views we don’t like. This seems to me to be a clear violation of the 1st Amendment’s Freedom of Speech clause — and as I’ve said many times, that clause means nothing if we don’t protect speech we hate. Speech we all agree with doesn’t need protection.

I think it is perfectly fine for the criminal’s views to come into play at sentencing. A judge should be able to take into consideration the motives and reasons for the attack when deciding a proper punishment. We do that now, even in cases that don’t involve “hate crimes.” Giving someone a harsher sentence and/or requiring other sanctions when their motives are based on hatred and intolerance is justifiable.

But the crime itself punishes people for saying things we disagree with, and that’s where it goes too far.

I had a case once where a man was arguing with a woman who butt in front of him in line at the supermarket, and as they yelled at each other, he ended up calling her a “stupid nigger.” He was arrested and charged with Ethnic Intimidation. He told me he was so angry at her that he just said the thing he knew would hurt her the most, but that his anger was not based on her race — it was because she had butted in front of him in line. “If she had been overweight, I would have called her fat,” he said.

That’s not an admirable thing for the man to do, but it shouldn’t be illegal. Our current laws against harassment could have covered this situation just fine and still punished him (and, chances are, had he not said this, they probably both would have been charged).

I was ready to use this case to challenge our state’s Ethnic Intimidation law, but as it turned out we worked out a deal to a much lesser charge, he paid a fine, and it went away — which was the best result for my client.

There is a big difference between laws prohibiting discrimination and criminal laws that punish you for being a bigot. I think everyone has the right to be a bigot. Why, without bigots, how would Fox News stay in business?