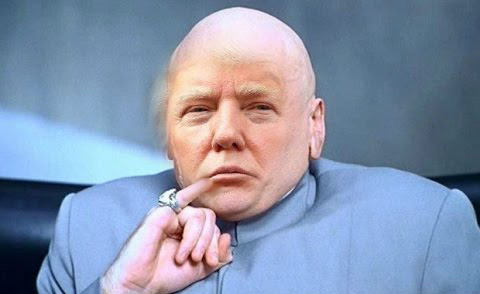 The Constitution mentions the pardon power in Article II, Section 2. The president “shall have the Power to grant Reprieves and Pardons for offenses against the United States.”

“Offenses against the United States” means for federal criminals, not state ones. So if, say, the state of New York brings charges against Trump, it doesn’t appear that he would have the power to pardon himself of those charges.

But even so, it’s a long-standing tradition in both English and American law that a person cannot judge themselves. A judge who commits a crime in his or her jurisdiction must have another judge appointed to rule over that trial. Clearly, a pardon is a type of judging and therefore a person cannot pardon themselves.

Usually no one gets pardoned until after they have been convicted and have served some time — the President may pardon them so they can have a clean record.  However, Gerald Ford pardoned Richard Nixon before Nixon had been convicted or even charged (even though those charges were clearly coming). This set a bad precedent, was highly criticized by many legal scholars, and surely played a part in Ford’s failure to win re-election. Since Nixon accepted the pardon, it also means that he agreed he was guilty, doesn’t it?

But there’s more to Section 2 as well — “except in Cases of Impeachment.” So a President cannot pardon anyone who has been Impeached (which would include himself). Impeachment, of course, is separate from criminal proceedings. Bill Clinton was impeached even though he had not committed any crime.

So can a President pardon himself? While the Constitution does not explicitly say, all precedent and logic state that he cannot.

Can I mention in passing how absolutely ridiculous this past year has been? If I had pitched this as a fantasy novel to follow Bloodsuckers, my agent would have said it was too outrageous and unbelievable. And now this lunatic President is talking about pardoning himself?

2 thoughts on “Can the President pardon himself?”