One of the Sad Puppies — a group of butthurt snowflake selfish white male Trumpites who whine about things like the 1% of female leads in science fiction movies — has been barred from attending a major science fiction convention after he planned to take disruptive action at the convention, having done similar things in the past. 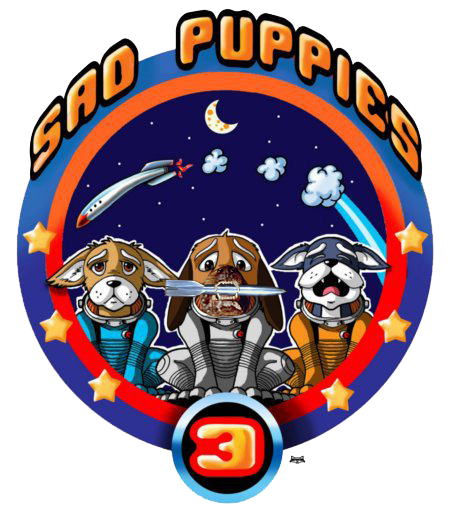 This is literally the Sad Puppies logo. They’re apparently sad because people get mad at them for being assholes to everyone else.

So of course, he’s claiming he’s being “discriminated against” because of his political views. These Sad Puppies, along with all the other whiny white males, KKK members, nazis, religious fundamentalists and Trump supporters, consistently complain that they’re being discriminated against because they’re no longer allowed to discriminate against others like they’ve always done.

Look, genius: A private organization has the right to deny entry to anyone they think will disrupt their group, including for political disruptions.

You have every right to hold whatever terrible political viewpoints you want. That is guaranteed to you under the Constitution. You don’t have the right to demand that anyone else provide you with a place or a forum for you to express those opinions, nor do you have the right to demand that someone let you into their group when they believe you don’t meet their standards. No shirt no shoes no service.

Discrimination is when you are being prevented from entering because of things you have no control over, such as your race or gender or place of origin. If you choose to be the kind of guy people can’t stand to be around and they say they don’t want you near them, that’s not discrimination. You chose to be that person.

As Frank Zappa said, “It’s okay to discriminate against assholes, because nobody was born an asshole.”

It’s always amazing to me how these people who always scream about how the “market” can solve all our problems whine and scream like babies when the market decides to do just that against them.

Edit:  Friend of the Blog Jim C. Hines explains this particular person’s history in more detail on his blog