A friend on Facebook recently posted “What’s everyone so upset about? The $600 check the government is giving us is better than zero, isn’t it?”

First thing you have to do is look at it this way: It’s our money. All the money the government has is ours. We can spend it on helping people when they need it most, or we can waste it on more giveaways to rich people and corporations who don’t need it, or to build a wall that does nothing to prevent illegal immigrants from coming here. (Those two things are in the bill, by the way. I am not making this up.)

Stop looking at this payment as a gift. It belongs to us. The government is us, not them. The money is ours.

Second thing is to realize how little this is and how this will make hardly a difference to people who are about to be evicted from their homes. 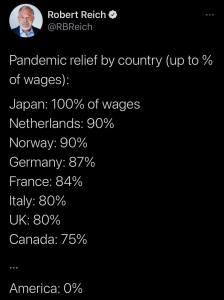 We’re in a national tragedy right now, and the way to solve it (as other countries have proven) is to pay people enough so they can stay at home for a few months and not have to work. The virus only travels from person to person, and if you stay away from everyone else, it will eventually die.

This is not theoretical. Countries like New Zealand, that did this exact thing, is now open again. They’re even having public sporting events. Americans, however, have proven to be selfish (especially when the country’s leader is the most selfish man ever) and that’s why we’re worse off now than we were a year ago when we started quarantining and addressing this issue.

$600 is nothing. That won’t be enough to allow people to stay at home for months. This is a “Let them eat cake” amount.

Keep in mind that the Democrats proposed $2000 a month back in May. They’re still trying to increase that $600 to $2000, but even then it’s just a one-time payment. Republicans have lied and have claimed that it was the Democrats who passed the $600, but there is literally a Democratic bill on the floor today to increase that, and it’s up to the Republicans to do it (which they won’t).