Government sucks but you don’t vote?  You’re part of the problem.

Bill Maher explains it well here, and with jokes.

You can criticize a religion without advocating for discrimination against the people who practice that religion.

Bill Maher had a great debate with fellow liberals on his show last week.  Ben Affleck accused him of being biased against Muslims for the things Maher said about their religion.  But those are two separate things.

It appears to me that the Islam religion is where Christianity was 500 years ago — it does not tolerate dissent, and punishes its enemies with death. 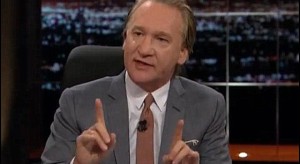 So it’s clearly wrong to assume every Muslim believes in the extremist views of that religion any more than you should assume every Christian thinks that adultery or eating shellfish be punishable by stoning to death.

But you can’t deny that there are many more Muslims who believe that certain blasphemy should so be punished.  Don’t believe me? Try drawing a picture of Mohammad and see if you don’t have to go into hiding, even in America.

The key is that liberals need to be consistent and not hypocritical.  You can’t criticize southern Christians for being prejudiced against gays while looking the other way when Muslims sentence their gay citizens to death.  And why do they do that?  Because of their religion … which is not exempt from criticism.

Some people get hung up over the fact that this is a religion, and believe that we should treat it differently.  As I’ve said before, the fact that your bigotry is based on your religious belief doesn’t cancel out the bigotry.  It’s still bigotry no matter how you came by it, and the fact that you really, really believe it doesn’t excuse it.

Followers of Islam who do not believe in such extremism need to force their religion to change.

Partially the problem is the liberal goal of accepting multiculturalism — to embrace our differences, in the same way Mr. Spock teaches us that Vulcans love “infinite diversity in infinite combinations.”  But there are some things we should never accept.  Taking away the rights of others in any culture is wrong.  And, you know, beheading innocent journalists to appease your god is also wrong.

And if we don’t call them out for it, and lay the blame where it belongs with the religious belief that encourages such actions, then we are partners in the crime.

Bill Maher did a “New Rule” this week that needs to be seen, in which he counters the “Reagan would never be accepted in the current Republican party” myth.

I remember Reagan, and except for a few minor issues, he would fit right in with the current Republican party. He’s their patron saint for a reason, you know.

Anyway, rather than just repeat the point Maher said, I urge you to watch. It’s funny, too.

And yeah, I know that in the headline, I’m using the term “teabagger”, which they hate. Ask me if I care.