I am constantly amazed at how many people think Karl Marx led the Russian Revolution and was all in favor of suppressing the public and stamping out all that is good in the world. I have seen political views being called “Marxist” that Karl Marx himself would have hated.

Let’s put this in perspective: Marx was observing how terrible life was for working people during the start of the industrial revolution. Children were working for pennies a day in unsafe factories seven days a week without adequate food, shelter or medical care. Europe and America were turning into a sort of feudal system where the rich trampled upon the poor, and it appeared that it would never change. 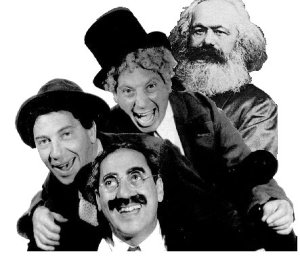 Marx thought that the only solution to this was a revolution, after which would be the establishment of communism. His idea of communism is like the hippies thought in the 60s: We’ll all work together, live in a commune (hence “communism”) and share equally, with no one above anyone else.

His view was that by sharing in this way, everyone could benefit.

Keep in mind that Marx, being an economist, was mostly talking about the economy. Marx was not against democracy. He saw democracy as “the road to socialism” and before he died, he even backed away from the idea that a revolution was needed (having observed the progress that was made in America thanks to unions). Marx was not against freedom of speech or other basic rights. He imagined that the people would still vote for their leaders but that the leaders would not be richer or better off than anyone they represented.

All of this is impossible, impractical, and will never happen.

But his ideas were still appealing to those people on the bottom rungs of society, and so when Lenin and Stalin brought about the Russian Revolution, they claimed they were doing this to bring about communism and thus help everyone. They lied. Obviously, Stalin did not have any intention of installing a democracy or allowing free speech, any more than Mao did in China using the same rhetoric.

And that’s the problem. As wrong-headed as Marx was about society and what solutions were needed to fix the problems he saw, he thought his ideas would benefit people, not enslave them. He was not evil incarnate. He was trying to make things better. His theory was warped by those who used it to accomplish their ends.

Keep in mind that Marx died in 1883, thirty-four years before the Russian Revolution. He had already begun to change his theories about what was needed to solve the vast inequalities in society, and it’s pretty clear that he would not have supported Stalin’s brutal regime which pretended to be communist.

Now, for those of you who skimmed over this and are now calling me a Marxist: No, I clearly am not. (Unless you mean Groucho.)  Communism, which robs humans of individuality and discourages individual thought and incentive, will never work. And neither will capitalism, which rewards the rich and the powerful while enslaving the majority. The solution is what basically every country in the world now has: a socialist system somewhere between those two extremes.

The debate is over where on the scale we should be.