Kim Davis, the Kentucky Clerk who has been lauded by conservative religious groups all over for her brave stand against equality in marriage, has finally come out of the closet and has gone through a transformation.

“I had been living a lie all those years,” she said. “While on the surface, I appeared as one thing to everyone, deep down inside I knew that my core being was completely different.” 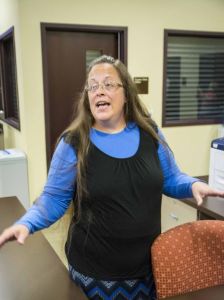 She was one of the lucky ones who had friends who approved of her becoming “trans” and actively encouraged it. “We’re so happy for her,” said one Christian backer, showing the love and understanding that Jesus encouraged.

“It was difficult, but I have to admit that based on the inner desires I have, I can no longer deny who I am,” Davis said. “Yes, it is true. I am a Republican.”

The Republican party, with its goal of inequality and intolerance for those it deems sinful in the eyes of a book written thousands of years ago by ignorant shepherds, welcomed her with open arms. “Finally, at last, Ms. Davis can be who she really is, free from discrimination, and welcome in society without fear of being treated with hatred,” said a local GOP leader, adding, “I mean, it’s not like she’s one of those goddamn fags, after all.”