These “patriots” (a/k/a “Vanilla ISIS”) who have taken over a bird sanctuary in Oregon say they are doing so because they want to “give the land back to the people.”

Forget about the silliness of these guys thinking that the words “well-regulated militia” in the 2nd Amendment refers to them — let’s talk about the whole purpose behind their protest.

One of their leaders, while showing his love of America and its freedom of religion by wearing a “Fuck Islam” t-shirt while at the same time telling us that God told him to do this, said that the government is a tyranny, stealing land.

While Native Americans laughed, the rest of us scratched our heads and said “Huh? Isn’t this already federal land, which means by definition that it does belong to the people? Land we all get to use?”

Ha ha! Silly us!  “The people” these guys are referring to are “rich ranchers.” They are upset because we, the people, have asked them, through our laws, to pay to use our land.

Pure tyranny, right? I mean, we can all remember when armed campers took over Yellowstone in protest over admission fees.

When one thinks of tyranny, one immediately thinks of that horrible dictator Teddy Roosevelt, the tyrannical man whose visage adorns Mt. Rushmore, who decided that much of America should belong to Americans and not land developers, mining companies, and ranchers. He started the government policy of setting aside land for everyone to use as public parks, hunting grounds, or other environmental means.

When I was a kid, I was always pleased to imagine that “U.S.” didn’t just stand for “United States” but that it also stood for “us” — as in “we are all in this together.”  Clearly, these guys think it only stands for them.

Constitutional fundamentalists, like religious fundamentalists, yell the loudest when their pet issue is involved.  Suddenly, all compromise and nuances go out the door, because they believe there is One Right Answer and they, and they alone, are wise enough to see what that answer is.

These people will gladly agree to gray areas in other parts of their particular Document That Cannot Be Interpreted (whether their holy book or the Constitution) but don’t you dare misinterpret the intent of (insert one:  God / Founding Fathers) when it comes to (insert one:  abortion / gun control). 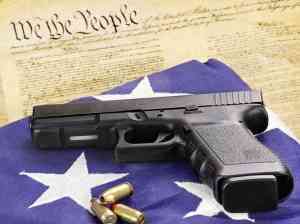 Many people who read the Constitution so strictly as to never allow any gun control will agree that the 1st amendment, despite being very clearly written, has many exceptions that seem to negate the words “Congress shall make no law abridging Freedom of Speech”.  “It’s all how you interpret ‘abridging,’ they will say.

So let’s look now to the poorly-written 2nd amendment:

A well regulated Militia, being necessary to the security of a free State, the right of the people to keep and bear Arms, shall not be infringed.

A well regulated militia being necessary to the security of a free state, the right of the people to keep and bear arms shall not be infringed.

Less commas.  But that can make a difference, especially if you are trying to figure out whether the amendment applies to “militia” or “people.”

I am not going to spend this entire post on every nuance of the 2nd amendment because that would take a book.  I advise you to read the first three parts of this current series.  The point of this series is to show that the Constitution is not written in stone, is a result of political compromises, and all parts need to be interpreted.

The 2nd is no exception. It’s not like the rest of the Constitution was written after debates and subject to deals whereas the 2nd was agreed upon by everyone off the bat.

There’s plenty of historical documentation to establish that the 2nd was another one of those Constitutional bits, like the 3/5th clause and other slavery provisions, added because the southern states demanded it. An original version did not use the words “free state” and those words are there for a reason — because the states wanted to make sure they could keep their “militia” which were used to round up escaped slaves. Seriously, there are writings from Patrick Henry and George Mason worried that the northern states, unable to stop slavery, would instead take the guns away from the people keeping the slaves in their place. Whether this was the main reason or not, it still supports my point that the amendment was a compromise.

If you want to be a purist, like many Constitutional fundamentalists claim to be, then I can argue that the Founding Fathers meant only for you to have the right to own guns that could only hold one bullet at a time, took a minute to load, and blew up in your face much of the time. “Of course they didn’t mean that!” they respond. “Ah!” I reply. “So you had to interpret it to include modern firearms.”

The 2nd amendment, just like all of the Constitution, doesn’t mean the same thing it did when it was written. For most of our history, the Supreme Court held that it applied to militia. It was not until the court decided Heller a few years ago that it became an individual right, which countered past history and was strongly objected to by four members of the Supreme Court. (That’s right — one justice made all the difference as to what the Constitution means.) Even still, Heller allowed for regulations of firearms. (That’s the part they forget to tell you most of the time.)

There is nothing magical about anything in the Constitution that leaves it free from interpretation. When I debate the 2nd amendment with Constitutional fundamentalists who believe that the 2nd is written in such a way as to prohibit any gun control whatsoever, the conversation usually goes like this:

“So you don’t think we should keep guns out of the hands of terrorists, criminals, the insane, and children?”

“Ah! So you agree with me that the amendment is not absolute and there are exceptions! Good. We only disagree on what those exceptions should be.”

I’m not going to spend this post on what I think they should be. My only point is that the amendment is not absolute and is subject to interpretation — just like every other part of the Constitution.