These “patriots” (a/k/a “Vanilla ISIS”) who have taken over a bird sanctuary in Oregon say they are doing so because they want to “give the land back to the people.”

Forget about the silliness of these guys thinking that the words “well-regulated militia” in the 2nd Amendment refers to them — let’s talk about the whole purpose behind their protest. 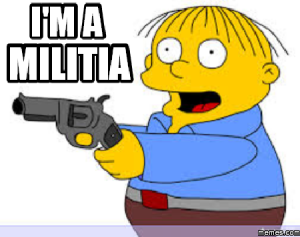 One of their leaders, while showing his love of America and its freedom of religion by wearing a “Fuck Islam” t-shirt while at the same time telling us that God told him to do this, said that the government is a tyranny, stealing land.

While Native Americans laughed, the rest of us scratched our heads and said “Huh? Isn’t this already federal land, which means by definition that it does belong to the people? Land we all get to use?”

Ha ha! Silly us!  “The people” these guys are referring to are “rich ranchers.” They are upset because we, the people, have asked them, through our laws, to pay to use our land.

Pure tyranny, right? I mean, we can all remember when armed campers took over Yellowstone in protest over admission fees.

When one thinks of tyranny, one immediately thinks of that horrible dictator Teddy Roosevelt, the tyrannical man whose visage adorns Mt. Rushmore, who decided that much of America should belong to Americans and not land developers, mining companies, and ranchers. He started the government policy of setting aside land for everyone to use as public parks, hunting grounds, or other environmental means.

When I was a kid, I was always pleased to imagine that “U.S.” didn’t just stand for “United States” but that it also stood for “us” — as in “we are all in this together.”  Clearly, these guys think it only stands for them.

One thought on “Whose Land is it, Anyway?”