Freedom of Speech is meaningless if it only protects speech we all like.

Trump, soon to be known as “the Tweeting President,” has declared that people should be jailed for burning the American flag. 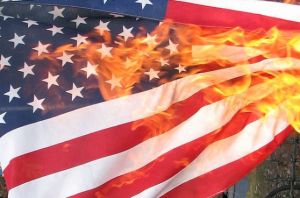 People who claim to be patriots (but who don’t quite grasp the concept) are cheering him on, pointing out that burning the flag is an insult to America and the veterans who have fought for what the flag stands for.

Well, duh. Of course burning a flag is insulting. So is standing on a corner with a sign saying “God Hates Fags.” They know it’s insulting when they do it. That’s why they do it.

But America has thicker skin than Trump, who spends more time thinking about how much he can’t stand Saturday Night Live than he does going to necessary intelligence briefings.* America knows that we can take the insults, because we’re better than that.

And we know that if we start banning speech we don’t like, then it may be our speech they come after next. The Founding Fathers knew that when they wrote the 1st Amendment. The Supreme Court knows that, as they have ruled many times. You have to protect speech we hate. Speech we all agree with doesn’t need protecting.

So if you really believe in freedom, if you really are a patriot, then mean it. Stand for what the Constitution guarantees. Don’t make exceptions.

Don’t be a thin-skinned baby who can’t take an insult — you know, like the immature child that a minority of us chose to lead us.

*I am not making that up