Trump is usually the one randomly suing everyone, but lately people have been asking if Obama can sue Trump for the lies he’s been telling about him.

The short answer is “No.”

Defamation includes libel (written) and slander (spoken). In order to win a case, you have to prove three things:

First, that the statement was false. This is usually the easiest thing to prove, but sometimes the thing being said is merely an opinion. 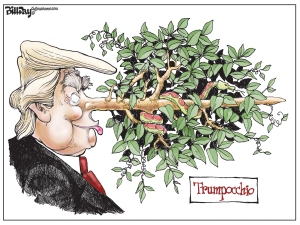 But there’s even more to it than that — you have to show that the person who made the statement knew that it was false or said it with reckless disregard as to whether it was true. (If it actually was true, then we stop there. Truth is always a defense against libel and slander).

In this case, the argument would be that no matter how much Trump believes it to be true, it just isn’t. Just like his belief that Obama wasn’t born in America, or that millions of people voted illegally, or practically anything else that pops into his brain that he tweets out that have no correlation to reality. Trump has a reckless disregard for the truth, and that means that he can’t use as a defense that he reasonably thought it was true.

And to make it even more difficult, the standard for celebrities and politicians is even higher than it is for a private citizen. You have to show that not only was the statement false and that the person knew it was false, but that they said it with malicious intent — they wanted to harm the other person, and weren’t just repeating some rumor or something. (Since almost everything Trump says has malicious intent, this requirement may be meant.)

So if you can show that the statement was a lie, you still have a ways to go.

The second thing is to show that other people believed it. If someone calls you a martian, then that’s clearly a lie. But if no one believes them, then what’s the point? The lie has to be believed by others, and by lots of others. The fact that a bunch of idiots who watch Fox News believe a lie doesn’t mean much — those people believe anything.

Finally, you have to show that you were seriously harmed in some way and not just insulted. You need to show that because of the lie, you lost your job and people are throwing bricks at your house and spitting on you as you walk down the street. You have to prove damage.

So if someone says “Joe is gay” and it’s not true and the person who said it knows that it’s not true, you’ve met the first burden. If everyone believes it, then you’ve met the second burden. But if no one cares and you aren’t harmed in the slightest other than perhaps being upset or embarrassed or insulted, then you have no case.

I don’t think Obama was harmed in the slightest by the latest Trump lie. The people who hate Obama still do, and those of us who have a brain still don’t believe anything Trump says.

So let me clarify:  Can Obama sue trump? Sure, anyone can sue anyone. Does he have a chance of winning?  Nah.