Obama and Hillary are so responsible for the attack on Benghazi wherein four people died. Pay no attention to the fact that Republicans gutted the budget for security at the embassy — the people at the top are responsible!

Unless they’re Republicans, of course. When 3000 people died on 9/11 under Bush’s watch (even though he had been warned by both outgoing President Clinton and his own internal memos that this was bin Laden’s plan), clearly he can not be held responsible for such a thing.

At least Trump, for all his many faults, understands this basic concept. He’s caused another rift in the Republican campaign by pointing this out, and George W. Bush’s brother Jeb!* isn’t going to take this lying down!

But geez, don’t you dare ask him why then Obama and Hillary are responsible for the Benghazi attack, because then he’ll stare at the camera for a very long period, like a deer in the headlights, before rambling on for a few minutes about how security is important.

Seriously, watch this and look at his body language, because he’s being forced to say something that he knows in his soul isn’t true — that it is completely hypocritical to absolve blame for one incident while foisting blame in the other.

*I believe he has added the ! to his name in much of the same way Prince changed his name into a symbol.

Hey, remember that terrible Benghazi conspiracy that was going to bring down the Obama administration?  The one that was an evil, illegal conspiracy because … well, they never actually explained that part, but it was certainly terrible because Fox News told us it was.

Well, guess what?  Here’s the funny thing.  The Republican-controlled Intelligence Committee of the House of Representatives finally concluded, after years of investigations, that golly gee, I guess there was no conspiracy after all! 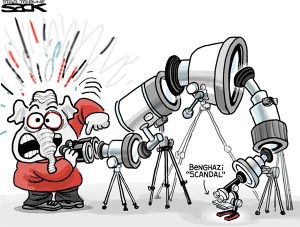 “This report shows that there was no intelligence failure surrounding the Benghazi attacks that killed Ambassador Chris Stevens and three other brave Americans. Our investigation found the Intelligence Community warned about an increased threat environment, but did not have specific tactical warning of an attack before it happened, … which is consistent with testimony that the attacks appeared to be opportunistic.”  (from the Washington Post story of the report)

This comes after they lied about what previous reports had said, and after it was proven that the Obama administration was correct about the reason for the attack.

Aren’t you glad they spent millions of your dollars investigating nothing?  Well, don’t you worry your head, because prominent Republicans have vowed to continue to search for non-existent ghosts and continue to bash the President over this.   Fox News will continue to claim that there is a terrible scandal there somewhere and the only reason the rest of the media is ignoring it is because they are all subservient to Obama.  Benghazi will continue so long as it can be used to rile up the party faithful and get them to donate to the GOP.

I’ve been asking what the Benghazi Scandal is for months now, but no one has been able to explain it to me. It apparently had something to do with the fact that the first reason given for the attack was that anti-Islamic video and then later, as more information became available, the story changed a bit.

Still not sure why that is a scandal.

As you may have heard, the Obama administration captured the mastermind behind the attack this week.

(This is the same Obama administration that captured the mastermind behind the 9/11 attacks, that ousted Gadaffi without any American lives lost, and that secured the release of an American held hostage for five years, just to remind you.)  And guess what this villain told us?  Yep, the attacks were because of the video.

So where does that leave the conspiracy-minded Republicans who insist that Beghazi is a scandal?  I have no idea, because clearly facts are not important to them — they believe it’s a scandal and therefore it must be.

This is despite the fact that everyone except Fox News realizes it isn’t.

A large percentage of Republicans, urged on by Fox News, are convinced that Benghazi is the worst example of corruption ever in American politics.  Worse than Watergate, worse than Iran/Contra, worse than the Teapot Dome Scandal.   Awful, terrible scandal.

They can’t quite explain what the scandal is, though.  The best I have ever been able to figure out is that bad decisions were made.  It’s not like there were accusations of bribes being taken or something.

These conspiracy lovers have convinced themselves that there is something there.  They’re convinced it exists, even though there’s no evidence for it.  Like Bigfoot.  (The fact that most of the same people have no idea where Benghazi even is tells you something.)

They tried to tie Obama to it — remember Romney accusing Obama of not calling it a terrorist action even though Obama is on record the day after the incident calling it just that?  Romney foolishly bought the conspiracy nut’s version of the story, which was clearly and blatantly not true.  And they haven’t stopped!  (You think it’s a coincidence that many of these people are the same ones convinced that Obama was born in Kenya?)  These people have been caught lying more than once about Benghazi, which is why the rational media has mostly been ignoring them.  (Fox, of course, left rationality long ago.)

Now they’re trying to tie Hillary to it, since she’s the latest threat.  So far, it hasn’t worked … the hardcore crazies are riled up, but those people were never going to vote Democratic anyway.  Polls show that the majority of Americans see this as the airless political stunt it is.

In a scene foreshadowed on Sorkin’s “Newsroom”, CBS has admitted that the source they used for their Benghazi report was bad, and apologized for reporting false information.

Well, this should stop all those critics who used the report to claim that there was a scandal here.

Ha ha! Just kidding. We all know that facts don’t mean anything to Obama critics.

There’s been a lot of debate lately about scandals, with different sides proclaiming or denying said scandals exist.

I’ve been thinking about it and I’ve come to the realization that it all depends on your definition of scandal.

If you think there has to be actual wrongdoing before there is a scandal, then you may be in the minority. The way the word keeps getting used, it seems most people consider anything they don’t like to be a “scandal.”

Take Benghazi. There is no evidence that there was any wrongdoing, even though there may have been mistakes and bad decisions made. I don’t consider that a scandal.

Or the IRS. Apparently the people who made the decision to investigate groups that are against taxes to make sure they really are non-profit were conservative Republican Bush appointees. Has there been any evidence to show that this was done for political reasons? None whatsoever, and the people involved have said as much. Were there any laws broken? Doesn’t seem so. Does it look bad? Oh, absolutely. Does that make it a scandal?

Then there’s the NSA phone and email situation. It appears that this is all allowed under the Patriot Act, has been approved by Congress many times, and has been in existence since the Bush administration. There doesn’t seem to be any evidence any laws were broken. If there is a scandal, it’s that Obama broke his promise to stop doing this.

For that matter, it appears that the seizing of AP phone records was done properly under law, too.

So I’m having difficulty finding “scandal.” I certainly don’t like the situation with the NSA and the AP and am against these kinds of intrusions on privacy and freedom of the press, but the solution is to change the laws so that this is not allowed and to hold Obama responsible for doing these things in the first place.

But that doesn’t make them scandals.

I am open to evidence, however. If you have proof that laws were broken or actual wrongdoing took place, let me know. I am certainly willing to acknowledge it when it happens.

Turns out there is a scandal after all.

The Republicans have searched for one since the incident happened. First they claimed that Obama never called it a terrorist act (like that is a crime). Turns out he did, the very next day. Remember how Romney tried to accuse him of that during the debate and instead just looked completely incompetent? That was fun.

Other than that, I haven’t been able to completely figure out what they’re saying. Apparently they are mad because the Obama administration didn’t have 20/20 hindsight to realize it was a terrorist attack. If there is something more, no one has been able to entirely explain it yet.

But one thing they said turns out to be true: Talking point memos were changed to make it seem that it was something other than it was.

Turns out though that those memos were changed by Republicans in their press releases to reporters, and not by the Obama administration.

Fake quotes. They just made them up.

So when people say that there is a scandal going on concerning Benghazi, you can reply “Yes, there is! I see it now!”

This is a common question those on the right ask. Why doesn’t the mainstream media cover Obama scandals?

Well, the answer is simple: They do. As we can see from the IRS scandal and the Associated Press scandal, both of which were the main stories on the nightly news and front pages, the media loves scandal (Just ask Anthony Weiner). Scandals get ratings and sell papers. It has nothing to do with ideology.

But they love real scandals, not made-up ones.

Right wing blogs, following Fox News’ lead, cry about made-up scandals all the time. Benghazi, birth certificates, umbrellas, or whatever silly thing they are obsessing over never make the “mainstream media” not because the other news sources are in Obama’s pocket, but because there is no news there. They’re fantasy scandals, and honest and legitimate news sources know that.

Much of the “mainstream media” is actually quite conservative. Many newspapers endorsed Romney and write editorials critical of Obama. But even they aren’t covering these “scandals” because they (unlike Fox) have journalistic integrity.

But the people who believe these things tend to be more paranoid than the average American. Many of these people also believe the government is out to install a dictatorship and take all our guns and install Sharia Law — and that the Illuminati or something controls the White House with help from the aliens in Area 51 and what-have-you.

So the inability of these people to understand that there is no vast liberal media conspiracy kind of makes sense, because they tend to believe in other things that don’t exist — like the Benghazi scandal.

On September 11, 2001, nearly 3000 innocent Americans died due to the greatest attack on American soil ever seen. Later, over 60 others were killed at various embassies.

So what does Dick Cheney, who was Vice President during these attacks, have to say is the “worst disaster in his lifetime”?

Why, Benghazi, of course.

I think I threw up in my mouth a little bit there.