To those conservatives I’ve seen posting things like “You liberals who are happy that Rush is dead are just full of hate!”:

Rush Limbaugh hated gays. He hated Mexicans, and blacks, and women. He hated liberals. He hated Muslims and atheists and anyone who wasn’t his version of “Christianity.” He hated everyone except rich white men like himself.

We liberals hate people who hate. We don’t hate people based on things they have no control over, such as all the things I mentioned above.

It’s okay to hate assholes, because nobody was born an asshole.

Our most prominent satirist these days is Stephen Colbert, who plays an ignorant conservative pundit so clueless he doesn’t realize he is saying things that help his opponents. Anyone who has a brain understands the character and gets the jokes.

This is a picture my wife made of Stephen Colbert using dryer lint. It’s now hanging in a Ripley’s Believe it or Not Museum somewhere. Her web page is here: http://www.heidihooper.com

And then there are The Humorless.

Or, as Stephen Colbert put it “The Ching-Chong Ding-Dong Foundation for Sensitivity to Orientals or Whatever.”

Come on, that’s funny.  By using this comparison, he is showing how insensitive the Redskins are being while they pretend to be enlightened.  “I owe all this sensitivity to Redskins owner Dan Snyder,” Colbert said after making the announcement. “So Asians, send your thank-you letters to him, not me.”

But some people just don’t get it, claiming he has “gone too far” and demanding a boycott of his show.  These well-meaning but humor-impaired people are against stereotypes and racism.

The thing about being a political commentator and being a TV weather reporter is that both can be wrong 50% of the time and yet still keep their jobs.

The difference is that the weather people are trying to be as accurate as possible. 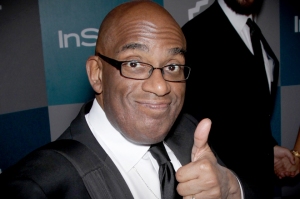 Mostly this is because some political reporters are in reality propagandists.  They have no interest in the truth; getting people to agree with their already decided-upon conclusions outweighs any desire for accuracy or even honesty.  The ends justifies the means.

Rush Limbaugh is the Poster Boy for this.  Like many of his pals in the right-wing media collective, he has no qualifications for the position whatsoever other than a loud mouth and a desire to never do any research.  His latest lie is that the “Polar Vortex” is another one of them there liberal conspiracies out to convince people of climate change.

So it’s nice to see Al Roker — someone who, unlike Limbaugh, is actually qualified to talk about climate — aim for facts.  (You remember facts?  They used to help convince people of the truth.)

On the Today show, he literally told Limbaugh and all the doubters to “stuff it.” Roker pulled out his old college textbook ‘The AMS Glossary of Meteorology’ from 1959 which used the term.  “Rush Limbaugh claims the Polar Vortex is a creation of a left-wing, liberal media conspiracy,” he tweeted. “It’s Meteorology 101. No political agenda.”

“The good thing about science,” says Dr. Neil DeGrasse Tyson, “is that it’s true whether you believe it or not.”

Outraged! Right wing columnists and reporters are outraged that the Pope is speaking out about inequalities in our system.

Outraged that he thinks governments should do more to stop the huge divide between rich and poor.

Rush Limbaugh warned of this Pope promoting “pure Marxism.” Fox News’ Stuart Varney criticized the Pope’s mixing of religion and politics. Sarah Palin called the Pope the worst name she could think of: “Liberal.” All of them said that the Pope had no business discussing politics.

You all remember how mad these right-wing pundits got about religion intermixing with politics when churches lobbied for laws against abortion, fought to prevent gays from getting married, and pushed to have creationism taught in public schools? (If you do remember, please remind me, because I can’t think of a single example — but clearly there must be, or else these people would be raging hypocrites now, wouldn’t they?)

Meanwhile, the Pope, ignoring them all, is doing his job, which includes sneaking out at night dressed as a normal priest and administering to the poor. Clearly, he is an evil, evil man that must be stopped.

Rush Limbaugh gave his listeners a history lesson the other day. He said that “caucasians aren’t responsible for slavery” because, after all, caucasians fought a civil war in order to end slavery!

Apparently, these caucasians were fighting against robots or something, because otherwise it would …

Ah, the heck with it. Trying to point out how stupid Rush Limbaugh is? Just too easy. Instead, listen to Moxy Fruvous’ hilarious song about him. Lyrics below; song begins around 2:45 (this was the only version I could find on the net).

THE GREATEST MAN IN AMERICA

Coming from Canada, we love those leaders who personify the US way to be
There was JFK, and LBJ, and WKRP

But of these there is not one to rival
The greatest genius of them all
He’s a megalo, with a healthy glow
He’s the man called Rush Limbaugh

He’s a dose of PT Barnum
With a Mussolini twist (El duce!)
There in the limosine, parked on the lawn
He’s a goofy Ghengis Kahn

I was a troubled soul
Consumed by voices advocating special interest groups and vice.
‘Til Rush rushed to my sweet rescue
Now I’ll never ever have to think twice

Ask us the name of the king
It’s RUSH!