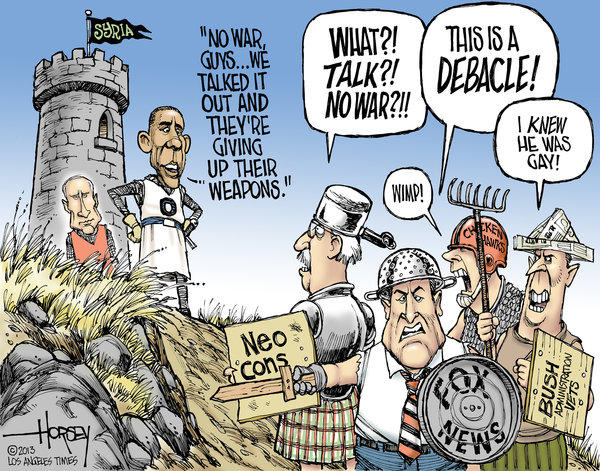 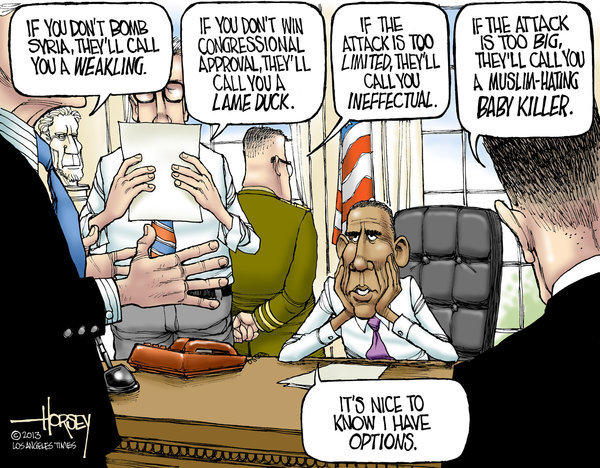 Secretary of State John Kerry has presented evidence that chemical weapons were used in Syria, thus justifying our action.

All over the globe, people are saying, “Wait, haven’t we heard this before?”

When Colin Powell, on behalf of George W. Bush, assured us that Sadaam had weapons of mass destruction, most of the world said, “Well, he’s the President of the United States. He wouldn’t lie about something like this.”

So now there is a lot of skepticism among our allies, which we deserve. (Thank you, GWB — the incompetence, dishonesty, and the damage caused by your Presidency continue to haunt us.)

There are some major differences between the two situations, though:

First, we have UN inspectors with evidence that chemical weapons were used, along with actual victims.

Second, and more importantly, we have a President who does not want to go to war. Bush and Cheney were looking for an excuse to go after Sadaam for a variety of reasons (“He wanted to kill my Dad,” “Halliburton will make a ton of money”, and so on).

Obama clearly does not want to get himself into another Iraq, especially in Syria where there are no good guys. He warned Assad not to use chemical weapons in the hopes of preventing such a disaster, but that didn’t work and now he’s painted himself into a corner where he has to react. He has stated more than once that this will be a drone-style attack without any “boots on the ground,” but to what end? Will this really accomplish anything?

A few days ago, I criticized Obama for acting without congressional approval. He’s a Constitutional scholar — he used to teach Constitutional Law at the Law School level — and whaddya know? He turned around yesterday and asked Congress for approval.

This was not only the right decision legally, but also politically. Congress is now stuck in the situation where Obama can deflect whatever blame comes his way. “Hey, you guys voted the way you did, and I followed your instructions,” he can reply if things go bad either way. Smart.

But maybe Congress and the world would have a more uniform view had George W. Bush not lied about Iraq. To quote GWB, “Fool me once, shame on — shame on you. Fool me — you can’t get fooled again.”

When the Constitution was written, war was a lot simpler — for one thing, it took a long time. You had to move armies and ships and supplies and well, this just wasn’t done overnight.

So the Founding Fathers, wary of letting the President have too much power as Commander-in-Chief, wrote Article I, Section 8, which gave Congress the power to “declare war.”

They haven’t done that since World War II.

So now Obama is about to take actions against Syria that, by any standard, is an act of “war”. But we’ve allowed our Presidents to do this so many times that no one is seriously suggesting that this is unConstitutional any more. (Well, except for the Obama haters, most of whom had absolutely no problem with GW Bush doing the same thing, so we can ignore them.)

But it’s still not that simple. The Constitution does not define what a “war” is or what the process is for Congress to declare it, nor does it prevent the President as Commander-in-Chief from ordering troops anywhere he wants and so on.

During Vietnam, Congress passed the War Powers Act which severely limited the President’s power to keep troops somewhere without congressional approval. It has not been enforced since then.

On the other hand, Congress did approve Presidential actions in Iraq and Afghanistan even though they never officially called it a “war.”

Then there’s the question of treaties. If this is done with UN approval, maybe foreign treaties take precedence over the Constitution, like when we went into Libya. (Well, with drones.)

So as our President becomes more and more imperial during wartime, we seem to be sitting back and going along for the ride.

This is especially disturbing right now with Syria, because a vast majority of Americans want us to stay away from that terrible place (How often do you get 75% of Americans to agree on anything?).

I’d say this is a perfect time for Congress to step in and say “no” to the President, but sadly the vast majority of Congress is in agreement with him.

I’ve never been a close follower of foreign policy, but this whole Syria thing has me worried.

First off, this is one of those situations where there is no Good Guy. The Brutal Dictator or the Muslim Brotherhood? My choice is to leave them alone completely.

Unfortunately, there are innocent people dying, caught between these two.

I’d like to go in and help these people, of course. It’s a natural human emotion. But I am not sure we can, and I am not sure it is worth it. After all, our experience in getting involved in the Middle East has been less than stellar. Sure, we got rid of bin Laden, Morsi, and Qadaffi, but it’s not like enlightened democracies sprung up to replace them. Maybe they’re just not ready for that yet.

What worries me is the banging of the Drums of War in Congress, where a vast majority of politicians are encouraging Obama to do something. (Hey, remember when the Constitution required Congress to declare war? Man, those were the days.) Only around 25% of the population is in favor of military action, but of course Congress constantly goes against our wishes.

I wish there was an easy answer.